Hollywood, the media, and political pundits may have you thinking all sorts of strange things when you hear the word “Islam,” but in reality, the teachings of Islam aren’t very foreign at all. Islam, Christianity, and Judaism are the three most widely followed monotheistic religions in the world, and all three of them are said to have been formed by the descendents of Abraham.

Islam as a formal religion began with the Prophet Muhammad (P) in 7th century Arabia. The name itself means “surrender” and the faith revolves around the concept of surrendering to the will of the one God. In fact, the declaration of faith in Islam is that “There is no god but God, and Muhammad is His messenger,” a statement that also denies the presence of any other deity worthy of worship, leaving no room for idolatry in the religion. Muslims pray directly to God, with no intermediary.  God as understood by Muslims is One, neither male nor female, does not beget, nor was He begotten, cannot be visualized in any limited form, yet His mercy and love for us cannot be quantified.

The following verse (2:255)  from the holy book of Islam – the Qur’an- describes the Islamic concept of God as follows: In Arabic Vs English translation. 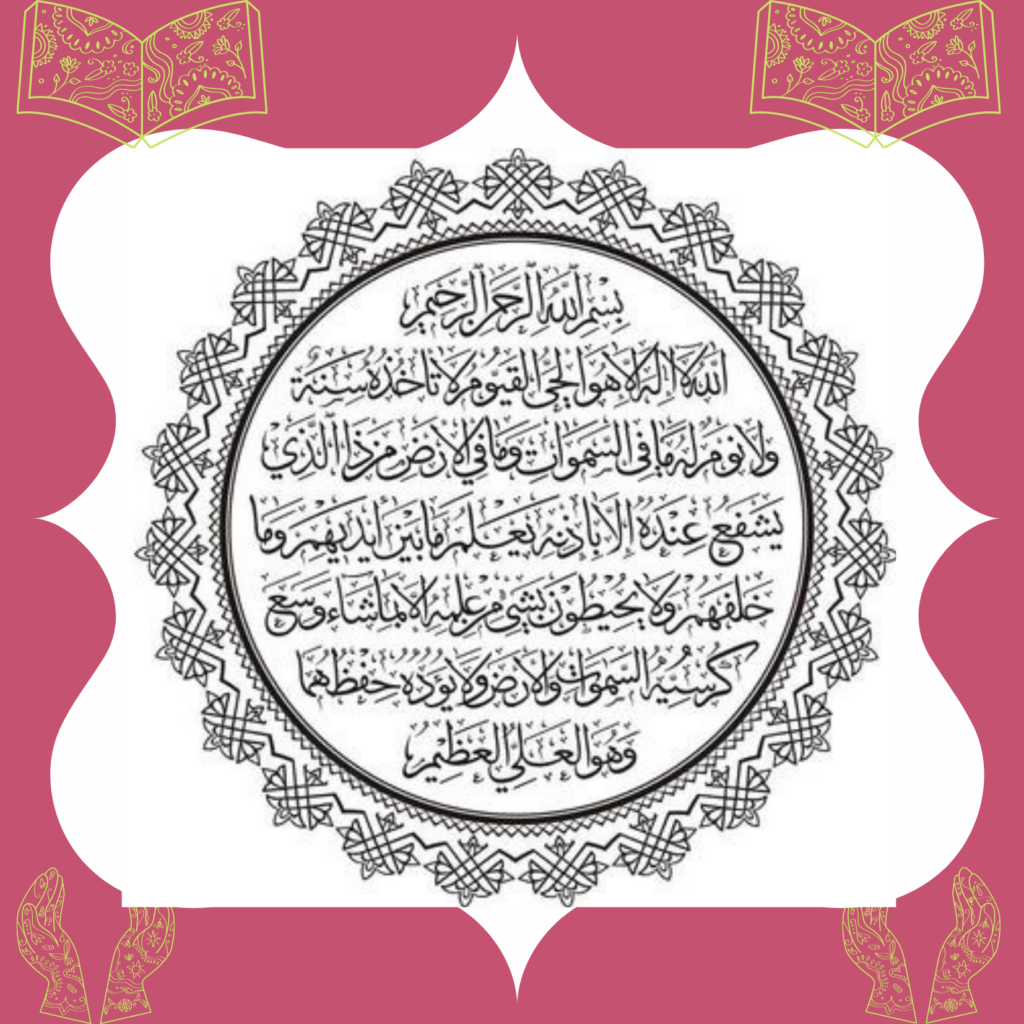 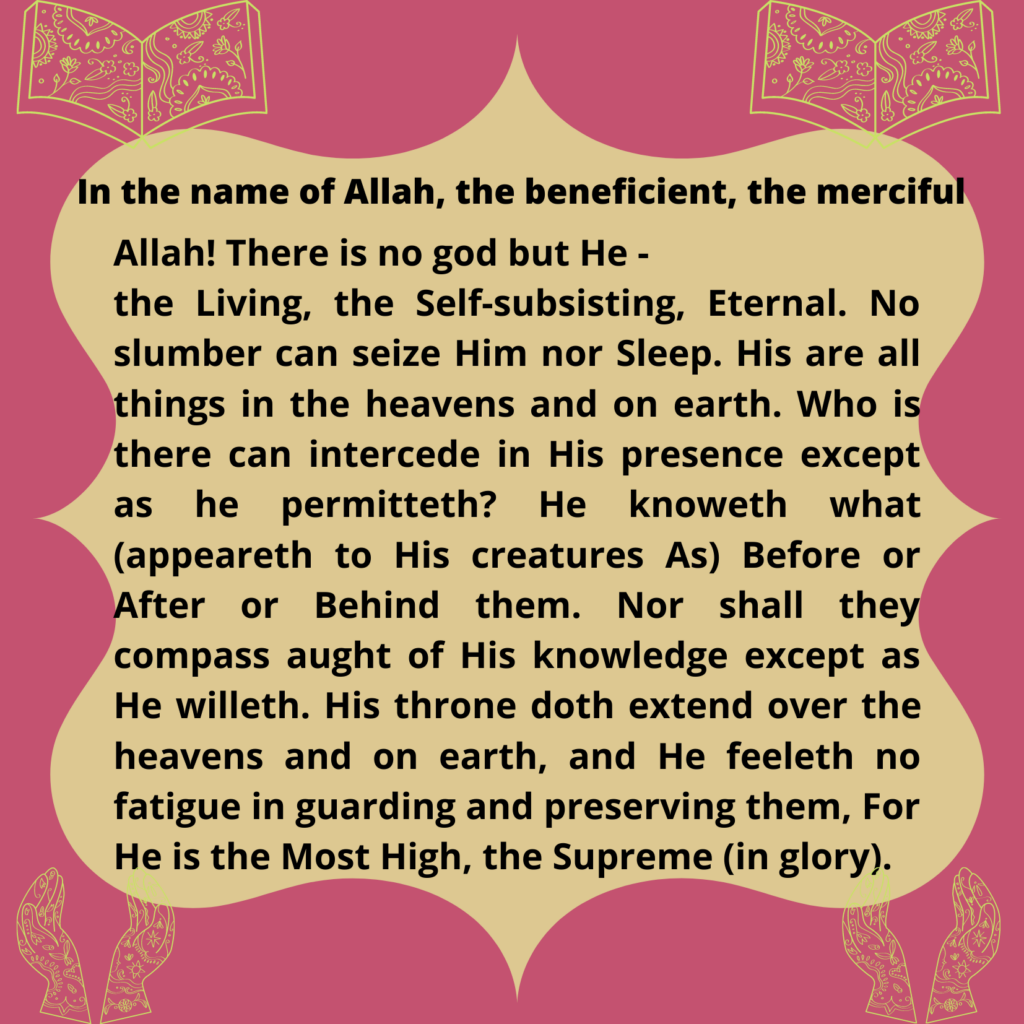 People who follow the faith of Islam are called “Muslims”. Muslims believe that the Prophet Muhammad was the final messenger sent by God to remind them of life’s purpose – to worship God and to prepare for the Afterlife when all will be held accountable for their deeds.

Biblical figures such as Adam, Noah, Abraham, Moses and Jesus are held in high esteem in the Islamic faith and they are believed to have been the Prophet Muhammad’s predecessors as messengers from God.

The holy book that guides the Islamic faith is the “Quran” which is considered to be revelation from God, and a completion of the message initially delivered in the Old and New Testaments. Practicing Muslims follow the five basic practices of the faith, which include the above declaration of faith, giving in charity, praying five daily prayers, fasting during the month of Ramadan, and performing the pilgrimage to Mecca if able. These pillars, along with the teachings of the Quran and the Prophet Muhammad constitute the framework for Muslim religious practice.

You’re thinking about those women in Afghanistan covered from head to toe, right? You’ve probably heard the popular stereotypes that Muslim women are oppressed, denied basic human rights, and are forced to cover themselves. Many oppressive practices that have been imposed on Muslim women around the world however don’t come from the religion itself, but rather from various cultural traditions. In fact, many of the repressive policies that have been imposed on Muslim women are similar to those imposed upon women of all backgrounds throughout the world for millenia, many of which continue to this day.

What you don’t often hear in the media is that Islam has always been at the forefront of championing womens rights. From the right to own property, choose whom they marry, run and campaign for public office to the right to have an education, many of these rights were granted to women by Islam before they were ever adopted in the West. Islam emphasizes equity between men and women, and when it came to Arab society in the 7th century, it abolished unjust practices such as female infanticide and the treatment of women as property.

Muslim women have held powerful roles as educators, nurses, doctors, warriors, and even political leaders over the centuries. Many Muslim countries have already had women elected to top leadership positions and have even had female heads of state (an accomplishment that has yet to be seen here in the US. Click here for more information

Some cultures see a fully-covered woman and think that more coverage is akin to oppression. Islam doesn’t see it that way, and the Quran provides a basic dictate to both men and women to dress modestly. How that instruction has been interpreted has varied amongst different cultures as well as over time. Indeed, while the initial intent of the “hijab” was based on modesty, over the years it has been utilized to clarify class distinctions and even political views.

While the extent to which men and women must cover in Islam is governed by different criteria, even these have been the subject of varying religious interpretations. Hence you’ll find that some Muslim women cover their entire body include a face veil, some cover everything except their face, and some do not cover their hair. Similarly, some men will wear traditional garb covering most of their person, wearing a beard and a religious head cap, while others will not dress to this extent.

The conversations surrounding the dress of Muslim women brings to light some important gender stereotypes and body-image expectations that are held right here in the West, which we as Americans are only just now trying to come to terms with. Expectations regarding body figure and when and where women should be covered and uncovered have all come to the fore. The true intent behind the Islamic directives on the female dress code, as mentioned in the Quran, highlight the goal of allowing women to go forward into society in a free expression of their faith and without fear of harassment, which is a goal women the world over have been fighting for millenia.

10 Inspiring Muslim Women We Should All Look Up To

And among God's signs is the creation of the heavens and the earth and the diversity of your languages and colors. Truly, in that are indeed signs for those who reflect. Quran 30:22

We envision a world in which women and girls are nurtured and empowered to reach their fullest potential, and social justice, respect, compassion and understanding are the only acceptable standards for human beings.

“God, His angels and all that is in the heavens and on earth, even ants in their hills and fish in the water, call down blessings on those who teach others beneficial knowledge.”
Hadith Al-Tirmidhi

All donations are tax deductible and zakat eligible.