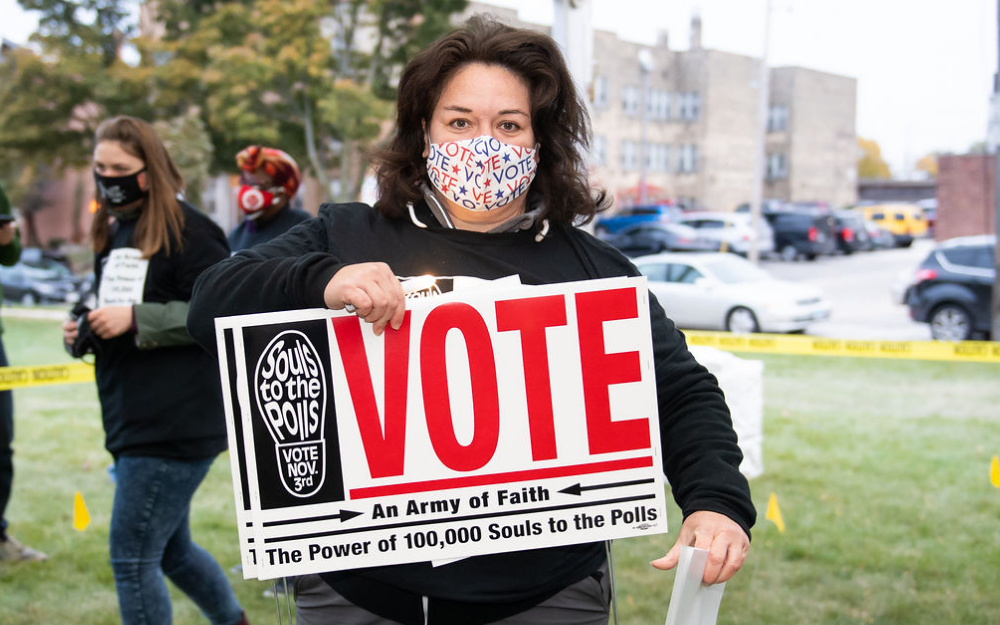 The scene was set for the Interfaith Candlelight Rally Kick Off for Early Voting. On the eve of Wisconsin’s two weeks of early voting (Oct. 20 – Nov. 1), a diverse group of religious and cultural organizations brought together faith leaders to “light up Milwaukee” and inspire their communities to vote.

The Milwaukee Muslim Women’s Coalition and the Wisconsin Muslim Civic Alliance lent their support to the effort as sponsors of the event.

Redeemer Lutheran Church served as host. “Redeemer is a great location and we like to host. We pride ourselves on our hospitality,” said Pastor Lisa Bates-Froiland in an interview after the event. “To remind people to vote the day before early voting starts is so close to our mission. As citizens, we are called on to live out our responsibilities as we can.”

By 5:30 p.m., when the rally started in earnest, amid a chill in the air and light snow, more than 150 people of multiple creeds and cultures joined together to share music and speeches, and to raise candles in celebration of the right to vote.

Muslims value the right to vote

Milwaukee Muslim Women’s Coalition President Janan Najeeb spoke about why it is particularly important for Muslims to vote in the 2020 election.

“As a Muslim American, I already voted because the values of our country are at risk.  On January 27, 2017, the first thing this administration did in office was to launch an attack against Muslims and refugees by instituting the Muslim Ban, closing our nation to a multitude of Muslim countries and refugees fleeing war zones and genocides. They were denied simply because of their faith,” she said. 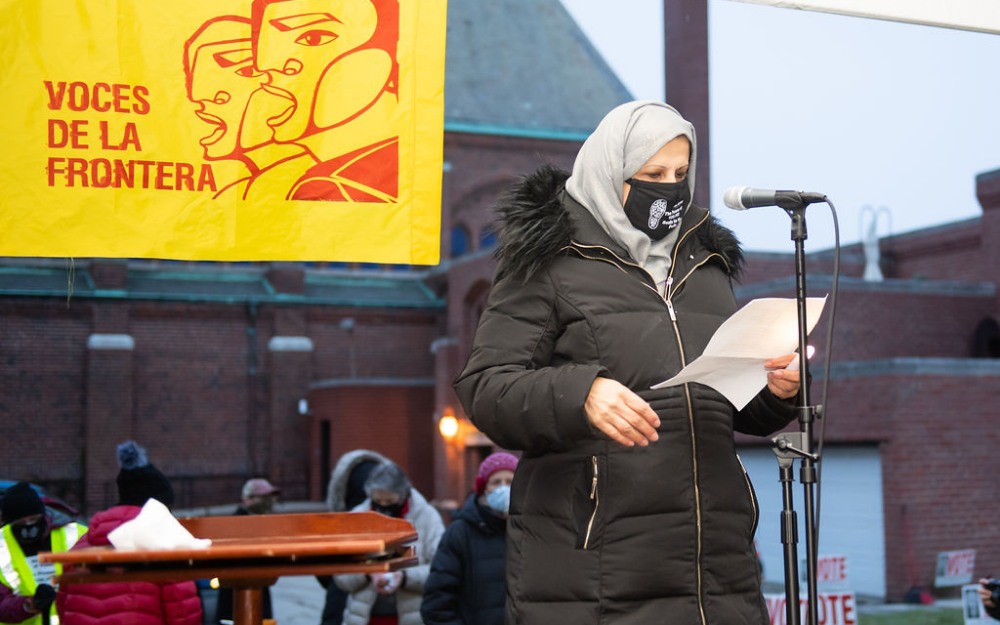 “I already voted because my children deserve to feel proud and deserve to be safe.  They should not hear their faith being maligned by their government leaders.”

She also said she voted because she is concerned about the future of the Affordable Care Act and access to healthcare for millions of people, climate change, management of the COVID-19 pandemic and the rights of American citizens to vote who are endanger of being disenfranchised.

“I already voted because I believe our country is enriched by it’s diversity, and I believe the only two Muslim Congresswomen in office deserve to have a voice and be safe, not threatened because they are Muslim.”

In a statement about the importance of the vigil, Wisconsin Muslim Civic Alliance President Will Perry said that for Muslims, voting is “worship in action. Our engagement in the political process brings value.

“As Muslims, Islam instructs us to do what is good, to be good neighbors, and to be of good character. When Muslims stick to our values and use them as a tool when making decisions, the outcome is ultimately good.”

The most diverse voter turnout in American history

Interfaith Executive Director Pardeep Kaleka shared a personal story about his parents immigrating to America from a small, rural village in India to go on to learn English, pass a test on the civil process and earn citizenship. “They instilled in me this promise of engaging in the civic process and voting, and making a better life for themselves.” 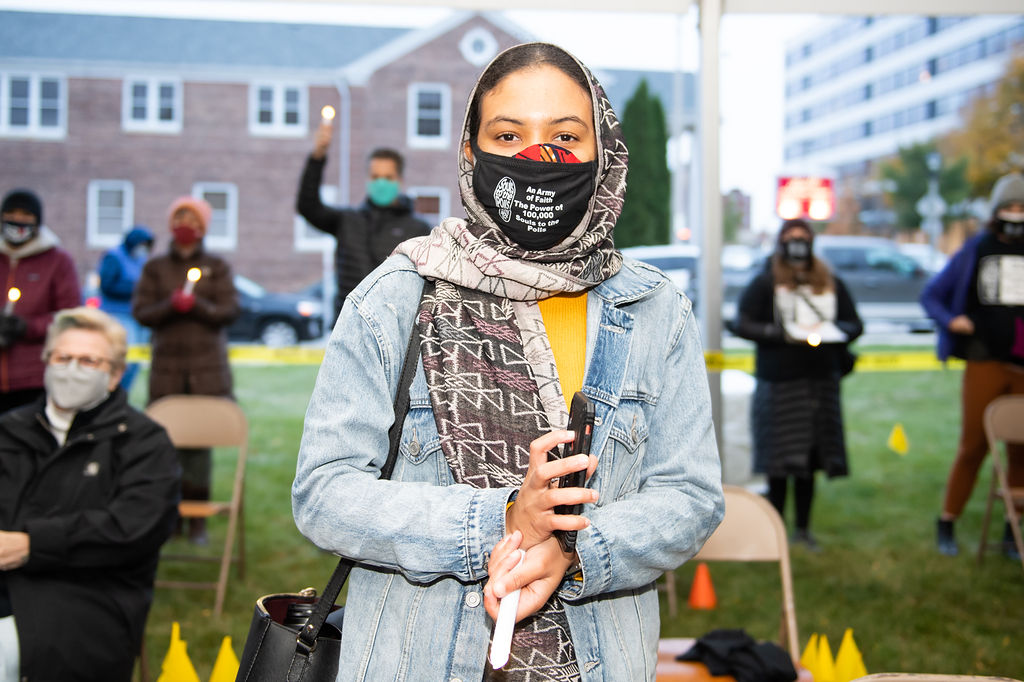 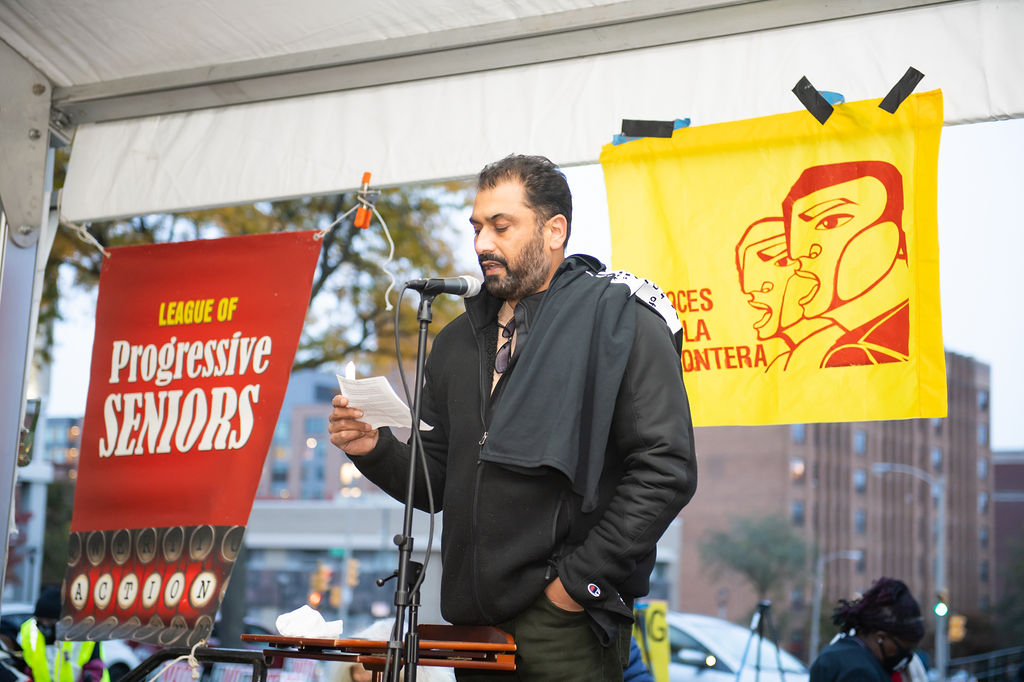 “While this fills me with joy and hope, it is not without its own particular challenges. Our country is having an existential crisis – whether to be exclusive or to be inclusive, opened or closed, united or divided. Is it for the rich or is it for the poor? Is it for the few or is it for the masses? Is this country a truly representative democracy?”

Building power with the vote

The Early Vote Candle Vigil developed as the interfaith community rallied to support an effort launched by Souls to the Polls, an organization that unites ministers and their congregations in Milwaukee’s central city to strengthen the voting power of the Black community.

Souls to the Polls was established in 2013 and has a leadership team of central city ministers committed to building an army of 100,000 voters. It views a strong voting bloc as the key factor in pressing state and local leaders to address the major issues facing African American families, including education, clean water, economic development, gun violence and governmental transparency, according to its website.