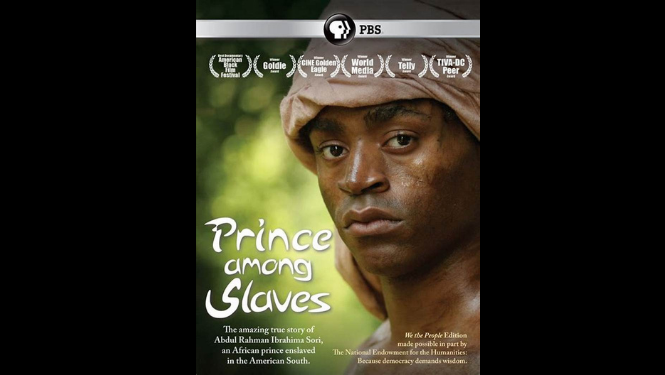 In 1788, the slave ship Africa set sail from the Gambia River, headed for American shores with its hold laden with hundreds bound in chains. Eight months later, a handful of survivors found themselves for sale in Natchez, Mississippi. One of them, 26-year-old Abdul Rahman Ibrahima, a highly educated African prince, and heir to a kingdom made an astonishing claim to Thomas Foster, the plantation owner who purchased him at auction, that the bedraggled Abdul Rahman’s father would pay gold for his return. Foster dismissed the claim as a lie.

Prince Among Slaves tells the story of Abdul Rahman, trilingual, a military general and heir to a West African nation the size of Great Britain, who did not return to Africa for 40 years. In that time, he toiled on Foster’s plantation. He married a fellow slave, Isabella, and they had nine children. Gradually, he also became the most famous African in America, attracting the support of President John Quincy Adams and Secretary of State Henry Clay. Abdul Rahman returned to Africa at the age 67, only to fall ill and die just as word of his return reached his former kingdom. Throughout a life of Shakespearean dimensions, Abdul Rahman maintained his dignity and hope for the freedom of his people.

The film won the Best Documentary Award at the 2007 American Black Film Festival in Los Angeles, as well as multiple others including Gold at the World Media Film Festival, TIVA DC Peer Awards, and Cine Golden Eagle. With a national broadcast on PBS, the film led off the network’s Black History Month’s programming in February 2008. 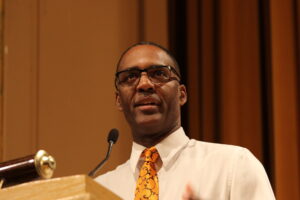 Reggie Jackson is a nationally heralded independent scholar and much sought-after speaker, researcher, writer, and consultant to the local, national and international media on race relations. He is co-owner and lead trainer/consultant for Nurturing Diversity Partners. He helps institutions and individuals understand how our country’s racial hierarchy developed historically, its impact on our lives today, and how we can realize America’s promise for all its citizens. Reggie shares seldom-told stories and data about the experiences of African-Americans and other peoples of color past and present. Reggie has won awards from the City of Milwaukee, the Southeast Wisconsin YWCA, MICAH (Milwaukee Inner-city Congregations Allied for Hope), First Unitarian Society, Milwaukee Press Club, Jewish Community Relations Council, and Frank Zeidler Center for Public Discussion and Milwaukee Magazine and recognition by the Sate of Wisconsin for his work in the Milwaukee community. Reggie is a protégée of his mentor Dr. James Cameron, lynching survivor and founder of America’s Black Holocaust Museum and served for nearly twenty years as Head Griot of the museum.

You can register for free and donations are much appreciated

To register, please click here. After registering, you will receive an email confirmation that will give you an access to watch the film on the MMWC Eventive page.